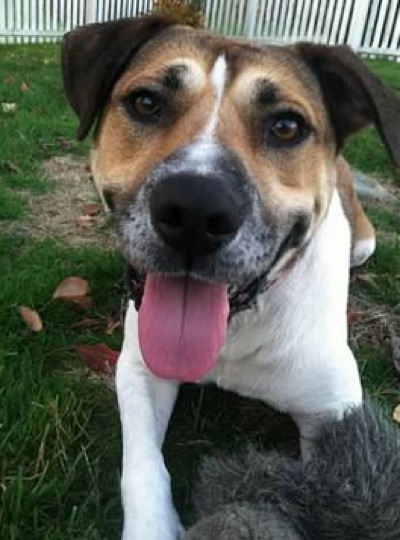 “Life is better with a dog or two,” says Caleigh, a proud Marine reservist, military spouse and – if that wasn’t enough – mother to two young boys and now, two rescue dogs.

Saving the first dog from abuse

To help cope with the challenges of life as a military spouse, in 2009 Caleigh adopted Cadence, a female shepherd mix. The dog had been abused and was ridden with heartworm.

In the years since, Cadence’s physical health recovered and she became more secure in the loving home Caleigh shares with her sons, Jameson and Jaxon, and their father – that is, when he is not on an active tour as a twelve-year staff sergeant in the Marine Corps Reserve.

While Caleigh’s husband was serving a recent tour in Afghanistan, she bought a house for their growing family and quickly realized that Cadence needed a friend to keep her company. Having had such a positive experience with Cadence, she returned to the same rescue group for the second adoption.

“We of course went back to Paws and Prayers,” Caleigh says, “so that we could rescue another dog who needed loving.”

In the fall of 2012 when Caleigh’s husband left for his fourth tour to Afghanistan and she went back to work, Caleigh returned to Paws and Prayers to search for another rescue dog. There, the Marine reservist found Cindarella – a then six year-old, previously abused dog – who also answers to “Rella” and “Relly Belly.” It was an easy decision for Caleigh to apply to the charitable companion pet adoption program, which motivates the adoption of at-risk pets – adult dogs and cats, large breed dogs and special needs animals – in exchange for benefits that make pet ownership more affordable for veterans.

“I chose to go through Pets for Patriots because the veterinarian in our area that I now use gives us a 10% discount on all their services,” Caleigh explains, “and when you have two six year-old dogs, it can add up.”

In addition to routine medical care, Rella needs special treatment for severe arthritis in her hind legs. By joining Pets for Patriots, Caleigh would be eligible for other benefits if she saved Rella or any other program-qualified pet, such as a 50% adoption fee discount from Paws and Prayers, a contribution from Pets for Patriots to ease the cost of pet food and other essentials, and special members-only discounts on other goods and services, like pet health insurance.

An abused dog with a “heart of gold”

These days, Rella shows little signs of the beatings she endured prior to her rescue, and has nothing but love for her new family.

“She grew to trust us,” says Caleigh, adding that although “she still has her moments when she shows you her past, she is honestly an amazing dog with an amazing heart.”

Caleigh is equally enthusiastic about the charity that made it easier to bring Rella into her family.

“Pets for Patriots is an amazing program,” Caleigh enthuses, who appreciated the help she received not only with the costs of adoption and medical care, but the frequent check-ins to make sure that Rella and the family were doing well together. Rella has proven to be a blessing not only to Cadence, but to the entire family. Although she has severe arthritis in her hind legs that requires medication to keep her comfortable, Rella loves to be near everyone. She particularly loves to play with her two little brothers, in spite of her pain, doing a “crazy spin move” when Jameson and Jaxon bring out her dinner bowl.

“She just wants to be around us and cuddle and steal every bit of love that we have to give,” Caleigh says. “From what I know of her past she should have no reason to trust or love a human again, but she does. She truly has a heart of gold.”

Caleigh is proud that hers is a dual-Marine Corps family with not one, but two rescue dogs. Of Cadence and Rella, she notes that “They truly bring so much joy to lives.” She further credits Pets for Patriots for their dedication to veterans, including those on active duty.

“I honestly believe us having our girls has helped my husband adjust better after coming home from his fourth combat tour.”

Are you, or do you know a returning veteran who would benefit from the love of a rescued pet?