Archie is a retired Air Force veteran who was devastated after the loss of his elderly dog, Murphy. He and his wife did not think they would be able to love another dog, but in time they decided to honor Murphy’s memory and save another rescue Beagle.

In 1953 Archie joined the Air Force. It was the final year of the Korean War, and he continued to serve for more than two decades. Finally in 1975 – at the end of the Vietnam War – the Air Force veteran retired as Senior Master Sergeant.

Archie’s most standout memory from his time in service has nothing to do with his military career.  He considers his most memorable moment to be when he met Claire, his wife of 59 years – or as he describes it: “…the most beautiful young lady who became my wife on July 4, 1957.”

Despite more than 20 years in the Air Force, six children and a lifetime of memories, Archie insists that nothing compares to meeting his would-be wife, who was introduced to him by none other than her mother.

“There were many events and happenings that were memorable, but none good or bad could top that memory,” he says.

Following his retirement Archie settled in Florida with Claire. They both worked in retail until 1997, at which point they sold their house to one of their children and began traveling across the country in a motor home.

The couple spent more than six years exploring the United States and “picked up a couple of furry travel companions” along the way: Murphy, a Beagle they adopted in Tennessee, and Elvis, a Balinese cat rescued from a Tampa, Florida animal shelter. 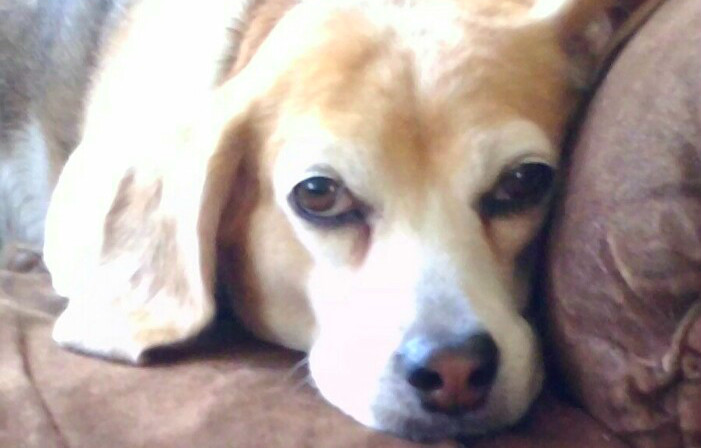 The family’s adventures on the road continued until 2003, when health problems prompted Archie and his wife to sell their motor home and return to Florida, where they currently live.

Grief stricken, Archie and his wife had no plans to bring another dog into their lives; Murphy was irreplaceable. But by the following year they were ready to open their hearts again.

“We swore we wouldn’t have another [dog],” Archie insists, adding, “We knew that there are so many pets out there that need a good and loving home, and that many of them are never going to get one and probably will die in a shelter.”

Archie and Claire decided to adopt a female Beagle in need of a home. They named her Murphy, in honor of their first hound. She has become and integral part of their lives and has even grown close with Elvis the cat.

At the time of her adoption, Murphy was believed to be between five and seven years old.

“We have no idea of her age or her background,” the Air Force veteran says, “but she has been a good dog and we love her and Elvis. Both of them are getting quite old now, as are we, but they are so much a part of our lives and so much pure love that we don’t want to think of losing either of them.”

All animals deserve a good home

For Archie and his wife, “the choice to adopt was a no-brainer.” All of their pets have been rescues and they wouldn’t have it any other way.

“We decided that ‘papers’ do not make an animal better,” Archie says.

The retired veteran urges others interested in adopting a dog or cat to consider doing so through Pets for Patriots and our companion pet adoption program for military veterans. He cites “the fact that you are helping veterans” as the primary reason he chose to adopt through our nationwide adoption program.

After having Murphy – and Elvis – in their lives for a few years now, the Air Force veteran does not hesitate when asked what he loves most about his adopted companion pets.

“Our pet friends are not ‘new’ by any means,” he says, “but we love them for their love and their loyalty. When they crawl into your lap, or cuddle up next to you, there is a true feeling of love.”