Home › Dog tales › Each suffering a loss, Navy man and shelter dog find each other 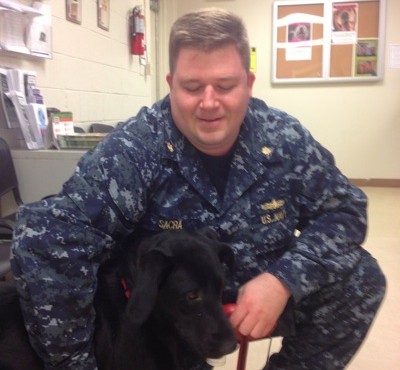 Chris currently serves in the Navy and tells how his recent Pets for Patriots adoption of a surrendered shelter dog changed his life after suffering the loss of his beloved senior dog. He is writing to our executive director, Beth Zimmerman.

Here is our picture from the day I picked Sophie up. My first dog, Samantha, was with me for 12 years. I adopted her as an Ensign and she’s been with me no matter where I was stationed in the world. She was in Norfolk with me for 9 years, then in San Diego for one-and-a-half years, one year in Bahrain, six months in Monterey, and then 15 months with me in Hamburg, Germany, where she passed very suddenly last February due to cancer. She had multiple tumors in her liver, kidneys and spleen.

I really was devastated, and although all my friends told me to get another dog, I didn’t want to just replace Samantha. Since I was moving back the states this past September, I decided to wait until I got all settled back here in Norfolk.

I had been to the SPCA several times, but didn’t feel a connection with any of the dogs there.

Finally in March, I went to the Norfolk Animal Care Center and found Sophie, a 3 year-old black lab, who had just been dropped off three days earlier by a family of six who said they didn’t have time for her, and were leaving her alone for 16 hours a day.

When I first saw her, I just felt this connection, like we needed each other.

I’m so happy to have her, and she’s very well adjusted already. She insists on following me everywhere, and even sleeping on the bed, leaning against me at night. What a sweetheart!