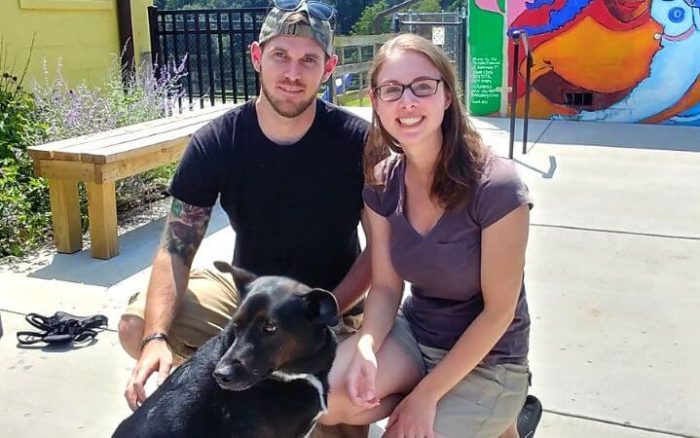 Zachary has a special place in his heart for the downtrodden. Perhaps that is why the veteran Army medic adopted one of the more overlooked dogs at his local shelter – a Labrador mix named Peeps.

Coming to the aid of others

Zachary served in the Army with the 25th Infantry Division (ID) as a combat medic specialist, or medic. In this capacity he was responsible for rendering emergency treatment to wounded troops, as well as limited primary health care to soldiers in need.

While with the 25th ID Zachary served mostly in the Pacific where the unit is based, but now calls Baltimore County home. The veteran medic is attending school and lives with his girlfriend, Shannon, a school teacher.

The couple’s home now includes one of those undervalued, overlooked dogs who can be found in nearly every shelter in the country.

A commitment to the most overlooked dogs

Zachary knew that he would adopt a companion pet once he was separated from service and living a more settled life.

“Dogs help make a house feel like a home,” he says.

When the Army medic started his search for a new family member he knew as well that he wanted a dog who was harder to place. He visited the Baltimore Humane Society, where the staff told him about our commitment to the most overlooked dogs and cats.

Our mission struck a chord with Zachary.

“[I] liked that Pets for Patriots helps to find homes for dogs that are sometimes not peoples’ first choice because of age, special needs, length of homelessness, or size,” he shares.

Three strikes and you’re in

Since 2013, Baltimore Humane Society has partnered with us to help the most overlooked dogs and cats in their care find loving homes. In addition to waiving the adoption fee for veterans in our program, their clinic discounts wellness services for pets adopted through our partnership.

Together we have placed dozens of companion animals with military veterans from all armed forces.

Zachary applied to Pets for Patriots and was approved promptly. And just six days later he met and adopted Peeps, a then three year-old, large, black Labrador mix.

“We also appreciated that becoming involved with this program was extremely easy,” he says, “and the application process was quick. This was especially important because many shelters are first-come, first-served.”

In many ways Peeps was one of those overlooked dogs – three times over.

Peeps was an adult. She was a large dog, where a majority of adopters prefer smaller animals. And while her ebony coat is stunning, some people shy away from dark-furred animals for various and irrational reasons.

Zachary is delighted that he did not have to bust his budget to bring Peeps home. First year costs for a dog can easily exceed $1,200 with the purchase of expensive one-time supplies like beds, crates, and other goods.

So for Zachary, adopting a companion pet was more affordable between Baltimore Humane Society’s fee waiver and the benefits we provide.

“[Pets for Patriots] helps reduce costs for veterans and service members who want to welcome an animal into their lives,” he says.

And while Peeps is still a relatively young adult, the Army medic knows that anything can happen at any time.

In addition to the shelter’s onsite clinic, Zachary can visit our partners at VIP Petcare Community Clinics – nationwide – and receive 10 percent off every bill.

Even when a dog or cat has not suffered prior abuse or abandonment, it can take weeks or even months for them to adjust. Peeps was no exception.

“Peeps was very shy when we first met her. We weren’t sure what her life was like before she joined our family,” Zachary says. “Over the past few months, Peeps has really started to come out of her shell.”

Now that her personality has emerged Peeps acts with the heart of a puppy, even though she was three years old at the time of her adoption. She loves getting Zachary and Shannon out for long walks and has discovered that snow can be fun.

The Army medic finds his new charge entertaining – and joyful.

“Peeps makes us laugh all the time,” he says. “Peeps also loves to play with her beloved plush sheep toy, so we sometimes call her ‘Little Bow Peeps.’”

It is common for adopters to change their pets’ names, but Zachary enjoys Peeps’ whimsical name. Not only does it suit her, but he has fun using her name in common words.

“She wags her tail now and also loves to give hugs to her favorite ‘peep-le,’” Zachary says, enjoying a little word play. “Peeps likes to sit with her ‘peep-le’ and listen intently to their conversations. Her ears are lopsided, so one is always up and one is always down.”

Pets – and Peeps – for Patriots

Because Pets for Patriots helped Zachary adopt Peeps, he enjoys telling other veterans about the program. He affectionately refers to us as Peeps for Patriots.

“We love this program so much that when we were filling out our adoption papers at the shelter, we met another couple in the waiting room who had served and helped them get started on their application for Pets for Patriots,” he shares. “They were really excited to learn about the program, and we were happy to be able to promote the organization.”