Joey is a special needs dog in Florida who faces death if not adopted, and his need is urgent. For his entire life, the three year-old Corgi-Chi mix has been adopted and surrendered, and subsequently moved from one foster home to the next. His life has been marked by instability, no one to devote the time he needs to learn to live with his disability, and – most tragically – an absence of love.

Joey’s fate was not always so desperate, but his life has been marked by one disappointment after another that no pet deserves to endure.

As a puppy he was dumped at a local animal control before being adopted by a family. They returned him because he had too much energy. Thankfully that same day he was rescued by a Florida animal welfare organization, Destiny for Dogs, and was in two different foster homes before being adopted by a family with two young children. Sadly, they were unkind to Joey and he was removed quickly from that home. Once again he was placed in a foster home with a woman who appeared to have the time and affection this special dog needs. Unfortunately she had unexpected health issues and could no longer care for him, and Joey was back in foster care where he was left alone most of the day because his foster mother worked two jobs. 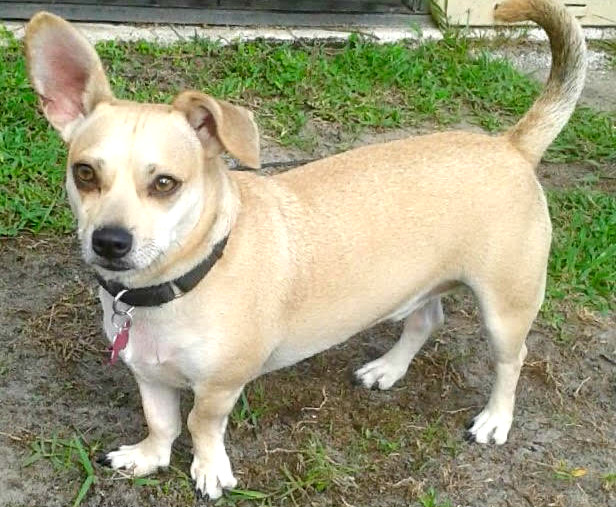 Joey was moved to yet another foster home, one where his temporary guardians grew to love him. However, Joey wanted to play non-stop with their five dogs and could not read their body language when they no longer wanted to play. He was moved to another home where his current foster has another rescue dog, and the resident dog is extremely stressed having another pup in his home. As a result, Joey must go.

Thinking the unthinkable: death if not adopted

After more than three years, several unsuccessful foster homes and no viable prospects for adoption, the rescue overseeing Joey’s care is facing the unthinkable. If Joey is not adopted, he will be put to rest humanely. It would be a tragic end to what has been a very sad life.

Due to Joey’s disability he cannot be placed in a boarding facility. He has a chemical imbalance that creates autism-like behaviors, though there are differences of opinion within the veterinary community about whether autism is present in companion pets. Joey is unable to “read” the body language or expressions of other dogs, for instance, and as a result does not understand when they tell him they no longer want to play. He is easily excited and needs a person to help him develop an “off” switch. As the rescue learned more about the particulars of his special needs it has become clear that Joey needs a quiet home with no small children or other pets. He has been working with a veterinary specialist on behavior modification which, in conjunction with his medication, should help temper his exuberant personality so that he can live harmoniously with a person or family of his own. But medication alone is not enough; he needs a consistent, compassionate person to work with him as well.

All Joey wants is a human to love him and much as he wants to love in return.

Joey’s short life has marked by instability, insecurity and lack of a love. And at this point he does not have much longer to live if a permanent home cannot be found for him.

What makes Joey so special

Joey is a sweet, lovable, cuddle-bug of a guy who cannot process information like most dogs and is easily overstimulated. He’ll need to be on medication for life, and is currently working with a veterinarian-behaviorist in Palm Beach to help him learn how to comfort himself and stay calm. Most of all, he needs a human who is as special as he is, and who has the desire to help him live up to his potential. The lack of stability is exaggerating the affects of his chemical imbalance, and his current foster family has little time to devote to his behavioral training.

Joey is out of options and out of time unless we can help him find that special person who will love him for life. Pets for Patriots is not involved in this adoption, but is sharing Joey’s need since his plight has touched our hearts. As an adult, special needs dog he is emblematic of many pets saved through our program. Serious inquiries for adoption only can be directed to:

If you cannot adopt Joey, please share his need.

It was love at first sight for Sonji, a woman who has a quiet, no-child home and is both able and willing to give Joey the special attention he needs. For the first time in his life, Joey has a real home and a human to call his own. Thanks to all who cared about Joey and shared his need; you made a difference!