A pair of adopted shelter cats and their abiding love are sustaining a Vietnam veteran as he battles cancer and aids his ailing wife.

Much more than a job

Ron was finishing art school when he was drafted to serve during the Vietnam War as an illustrator. Despite his willingness to deploy anywhere in the world, he was stationed stateside in Florida and Minnesota, respectively.

“A good part of my job was creating artwork and briefings for NORAD and ADC,” he says.

NORAD is the North American Aerospace Defense Command. It is a joint command of the United States and Canada that maintains aerospace control and maritime warnings for all of North America.

ADC, or Aerospace Defense Command, was activated in 1968 during the Vietnam War and disbanded in 1980. It operated under the command of the Air Force and was responsible for continental air defense.

The young art school graduate understood the sobering impact of his enlistment as soon as he donned an Air Force uniform.

“There were many moments of time that mattered,” Ron recalls. “From first being aware, in basic training, that I was wearing a green uniform that had ‘U.S. Air Force’ on one side and my name on the other, to when I learned to fly.”

Decades later, Ron still feels the sense of purpose that he had as a young draftee. He knows that his service mattered, that it had significance both to and beyond his own life.

“But, after all these years, what strikes me is just how much those years mean to the rest of your life,” he says. “It’s so much more than ‘a job I had for a few years a long time ago.’”

Ron is now retired and lives in Michigan with his wife, to whom he is primary caregiver.

“I mostly stay at home to take care of my wife who has primary progressive MS and can’t stand or walk,” he says.

Multiple Sclerosis, or MS, is a disabling central nervous system disorder that severely affects communications between a person’s brain and body.

Yet the Air Force veteran is coping with health challenges of his own. Ron is in treatment for prostate cancer.

“…the natural order of things”

Companion pet adoption comes naturally to Ron. He has always had animals in his life.

“I’ve always loved animals,” he says. “I’ve had dogs that I’ve loved. But mostly I’ve had cats in my life.”

The Air Force veteran concedes that it was not some compelling need that inspired him to adopt shelter cats. Rather, it just seemed like the right thing for him to do.

“For me, it wasn’t so much that I realized I needed a pet in my life. It was more like having cats was the natural order of things.”

In December 2015, on the very day that he was approved into our program, Ron adopted a then five year-old cat named Shadow as well as his sister, Gingersnap. Shadow was promptly renamed William and Gingersnap, an orange tabby, was renamed Abbie. 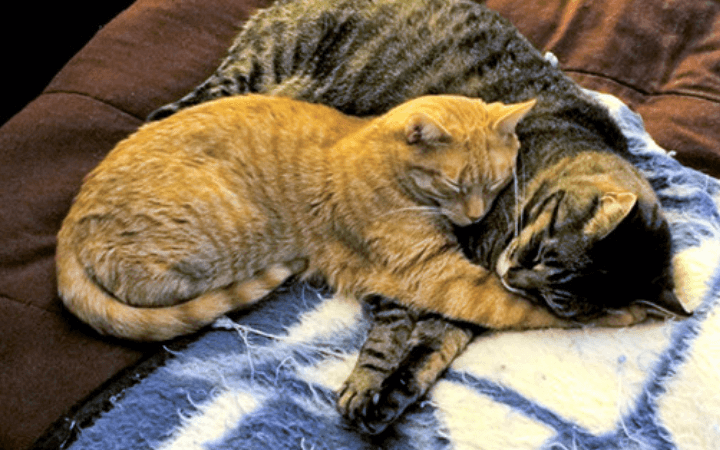 But just two months later William died of acute renal failure. His death was both unexpected and tragic, and hit Ron very hard. After all, it was the passing of a previous cat that prompted the Air Force veteran to adopt William and Abbie in the first place.

We reached out to our partners at Michigan Humane Society where Ron adopted the two shelter cats. In an act of grace and compassion, they offered to waive the adoption fee for another cat of Ron’s choosing.

Vietnam veteran rises to the challenge

Although Lori was just a little over one year old, she has lifelong behavioral issues that qualified her as special needs and challenging to place.

In addition, Lori had been sick with chronic urinary tract issues while in the shelter, where she had been for an extended time. And it that were not enough, Lori is a black cat and many dark-furred animals take longer to be adopted.

Ron felt confident that he could manage Lori’s behavioral and medical issues, and give her the loving home she deserved. It was the Michigan Humane Society that originally told Ron about our partnership.

Since 2011, the shelter has worked with us to inspire the adoption of the most overlooked dogs and cats to military veterans.

Originally the shelter offered deeply discounted adoption fees to veterans in our program, but recently decided to waive all adoption fees. Michigan Humane Society continues to offer a 10 percent discount at their three full-service veterinary clinics.

“If you can adopt through Pets for Patriots, there is no reason not to. Everyone involved was kind and helpful,” he says. “And Pets for Patriots paying for some of the food and supplies doesn’t hurt.”

Ron refers to one of the many benefits of our mission to make pet adoption more affordable for military veterans. The Air Force veteran knows that he has two organizations that have his six.

“Everyone involved only wants what’s best for the pets and for you.”

Most dogs and cats arrive at shelters due to some hardship that has befallen them. Some are victims of neglect or abuse, others are abandoned, and still others are surrendered for various reasons by the only families they have ever known.

Like many adopted pets, Ron’s two shelter cats arrived in his home with their own mysteries. He quickly learned that neither are lap cats.

“I don’t know what their lives were like before. But they love their people,” he says. “And they know that when your hand reaches for them, that it will only be to pet them.” Living with cancer and being the primary caretaker to his wife has been hard for Ron. In many ways his cats are his respite, and he has enjoyed discovering more about them as their bonds grow.

“Like people, all cats are different,” he shares. “They have different personalities, likes, and dislikes. While you’re learning about the cats, the cats are learning what they can expect from you, along with your likes and dislikes.”

And like most companion animals, Ron’s shelter cats let him know what they expect from him. They have developed routines are touching and meaningful, and bring them all even closer together.

“Lori, for example, has trained me so that when she jumps on the back of my chair in the living room, I’m supposed to walk with her to the kitchen and pet her while she eats,” Ron says.  “She will even walk past the food to come and get me.”

But perhaps the most meaningful part of adopting shelter cats is how they ground us in what is most important in life. Companion pets bring out the best in us and teach us what matters most.

“Pets add value to our lives by reminding us every day that there is love and innocence in the world,” Ron says. “These beings feel the same way about you every day. They count on us. And their love is unqualified.”